It is heartening to know that Marwari cuisine is in great demand in Dubai. People start drooling at the thought of delicious Dal baati churma, Gutte ki subzi and lahsuni chutney. However, despite this demand, one feels a dearth of good restaurants catering to this rich, flavourful food.

The good news is that Sagar Ratna is one restaurant that fills this gap and comes as a reliable address for Marwari cuisine in Dubai.

The owners of this restaurant are a team of three enterprising people- Vipin Maloo, brother Piyush Maloo and their friend Ashish Maru. The trio takes pride in the fact that their restaurant caters to authentic Rajasthani food which is hard to find in this country. Hence, taking on from the stupendous success of their first outlet in Jumeirah Lake Towers (that opened in 2016), the trio started the second outlet in Oud Metha in January this year.

Speaking about the authenticity of Marwari food at Sagar Ratna, Piyush comments, “Our idea is to stick to originality, hence we prepare our dishes in desi ghee, the way it is cooked back home in Rajasthan. Also, our chefs have been specially flown in from Jodhpur, so we are able to serve Rajasthani food to its true genuity.” Adding to this, Ashish reckons, “With a sizeable Rajasthani populace abounding in UAE and non- Rajasthanis relishing this food with equal enthusiasm, we aim at serving wholesome, authentic and sumptuous Rajasthani food in an absolute vegetarian manner.”

My visit to this sober, home-styled outlet was like a ride through the recesses of the culturally rich state of Rajasthan. I would not call myself a connoisseur but being a Marwari myself, I have a reasonably good idea of the taste of Rajasthani dishes and can safely reckon that food at Sagar Ratna tastes truly authentic and appetizing. 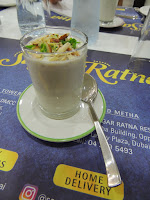 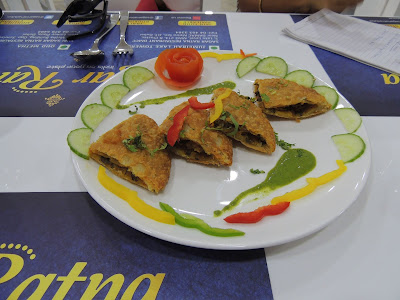 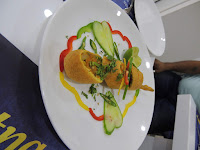 My food journey at Sagar Ratna began with Mirchi vada and Pyaaz kachori, both of which earn a big thumbs up. As a matter of fact, these also happen to be the signature dishes of the restaurant. Pyaaz kachori tasted really amazing, i can rate it the best I have ever had, either in India or Dubai. Mirchi vada was also delicious with the perfect balance of spice and taste. The Makhaniya lassi which is an interesting combination of Gujarati dessert shrikhand and Punjabi lassi served with a topping of nuts was a perfect accompaniment to the mouthwatering starters.

Then came the Mehrangarh platter that takes its name from the famous Mehrangarh fort in Jodhpur. It is a scintillating assortment of kababs served in sizzler style. The entire platter tasted great, but the Seekh kabab and Paneer malai tikka stood out and so did the Stuffed Aloo. It was discovered that the softness of paneer tikkas is attributed to the usage of organic paneer made in-house every morning. No wonder, the softness of paneer was par excellence.

I was already full with these filling starters. But the sight of irresistible main dishes enticed me to give them a try. Consisting of Ker Sangri, Gutte ki subji, Smokey Dal Makhani and the signature dish Dhungar Paneer Tikka (another signature dish) were sumptuously served with a basket of Naan and Missi rotis. There were fresh chapattis as well which were really soft. The Jadi

Booti Naan in the bread basket also caught my attention. A novel item by itself, this roti is tempered with chilli flakes, sesame seeds and is a tempting treat for Rajasthani people, who are eternal spice lovers.

The meal was rounded off with evergreen Marwari dessert, Moong dal halwa, which tasted amazingly delicious and the final top-up came in the form of cute Katori Ghewar, which is also a popular dessert from Rajasthan.

So, it was an evening spent enjoying delicious Marwari food served with warmth and amazing hospitality, which is the hallmark of Sagar Ratna. Once you try, you are bound to return for more! And don’t be worried about the spice levels. All you need to do is brief the staff about your comfort level with spices and it shall be taken care of.