Life has been quite a fruitful journey, with every opportunity efficiently channeling my passion for making my dreams come true! Read on to know about how Toastmasters helped me overcome my stage fright and articulate my thoughts into something worth mentioning.

It was 10 pm. Bandana lay on her bed gazing at the full moon peeping through the window. A tiny star shone next to it. Her thoughts shuffled through the day’s happenings. It was her daily bedtime ritual. She couldn’t feel happier for herself. A deep sense of delight and satisfaction ruffled through her being. The organiser’s words kept reverberating in her ears. “I now welcome the eminent Journalist & Blogger, the emcee of Bharat Nirman Awards, Miss Bandana Jain to take us through todays programme!”

With  fear and nervousness all weighing in equal proportions, Bandana strode on stage. She looked resplendent in an off -white, uni-shouldered gown. With hair done sideways into curls, she looked nothing less than a glowing Greek goddess.  Butterflies raged in her belly but she gracefully carried on with her winsome smile. In all probabilities, none of the two hundred-something audience could have made figured out her apprehension. As the show proceeded, her confidence quotient increased. She conquered the stage, sailing smoothly through the entire ceremony. She introduced the dignitaries with poise, Mr Vipul, the Indian Consul General, UAE; His Excellency Sohail al Zarooni, Chairman of the Al Zarooni Foundation, Indian minister, Arun Bhandari, etc. In a nutshell, she was an epitome of poise and elan.

The programme was a roaring success. She received adulation from the organisers of Bharat Nirman Award. As always, her closest buddies Srishty, Smitha and Sneha were there for her! Her family waited for her next to the stage. Her apple of the eye, 15 year old daughter Maahiya hugged her tightly, “Mommy, you were awesome!”

Bandana couldn’t have asked for more! It was her childhood dream to be addressing an audience, to conquer a stage successfully. But being shy and introvert by nature, she always viewed it as a remote dream.

Like all good things, Rome was not built in a day!

Her mind rolled back three years! By this time, she had established herself as a reputed lifestyle journalist and model in Dubai.  It so happened, one of Dubai’s reputed schools invited her to judge Children’s Creative Arts Competition. She accepted it on a joyous note. The judging went on quite well. It was interesting to see minefield of talent that lay in these youngsters. At the end of the program, she was invited to speak a few words onstage.

An otherwise cheerful Bandana transformed into a bundle of nerves.

Her palms broke into sweat, her feet trembled and she was a nervous wreck. With great difficulty, she managed to speak those incoherent ‘motivational words’ and ran off the stage as if she ran for her life. Back on judge’s seat, she was filled with feelings of remorse and self-doubt. “You are such a loser, Bandana. You couldn’t speak few words on stage, such a shame!” she retorted to herself.

Once home, she was utterly restless. She strode back and forth in her living room. She was not the one to accept failure, she was determined to do something about it. But how, when, where, she had no clue…

It is often said, ‘Man proposes, God disposes. She started searching for some coaching in public speaking, online, offline didn’t matter, she was hell bent on achieving her goal whatsoever. One of these days, her friend Neha introduced her to the Toastmasters Club. Bandana wasn’t much convinced, until Neha persuaded her to attend a meeting as a guest. The meeting was held in Dubai Public Library in Mankhool.  Bandana agreed, she introduced herself to several like -minded people, who were looking to overcome stage fright, hone their speaking skills or develop their leadership abilities. There were speeches, there was impromptu speaking, debate and even constructive feedbacks given for improvisations. Everything was done in an amicable atmosphere with mentors for personal guidance.

Bandana was awestruck!! All this while, she had been scouting for something so similar and today, by God’s grace, it fell straight into her lap!!! Suddenly, everything seemed to be falling in place. Her search had finally ended. No second thoughts! She thanked Neha profusely. The very same meeting she signed up as a member.

There was no looking back for Bandana!

What followed was speech crafting, rehersals, debates and contests. Her mentor Ms Sowmya was not only a seasoned speaker, but also a compassionate and thoughtful individual. She was extremely supportive and led Bandana through rigorous practice sessions with great patience. Under her able tutelage, Bandana started blossoming into a better speaker.

Almost a year later had elapsed. One afternoon, the organisers of Bharat Nirman Awards called her up. “Ma’m, we are calling with reference of Mr Neeraj, the president of Jain Social Organization, Dubai. We would want you to compere the Bharat Nirman Awards Ceremony 2018 to be held on May 7th in Dubai.”

Bandana couldn’t help admiring the beauty of the full moon. She gazed at the star outside. Tiny, yet twinkling.

Some pictures from my Emcee journey- 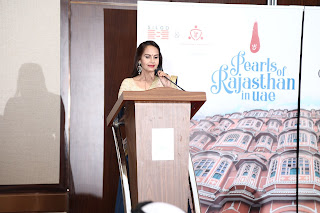 One Thought to “MILES TO GO…ON STAGE”