Across the laid-back vibes of sugarcane- laden fields, mountainous backdrops and breezy beaches, Bandana Jain explores a tropical island, which is far more than the quintessential honeymooner’s destination. It’s surely for reasons like these that some travelers don’t mind flying as much as thirty- hours to enjoy this paradise isle called Mauritius!

Through my aircraft window, I could see a thin film of clouds giving way to the beauty of the greenery beneath. Voila, such a hearty welcome by Mother Nature! Our joys were multiplied when on ground zero, we were able to enjoy the surreal views through the glass façade of the airport, even as we worked our way through the immigration checks.

As we entered the gates of our Hotel Riu Creole, there were coconut trees everywhere. A huge banyan tree majestically perched in the centre of the aesthetically- designed lobby and we could already feel the tropical island excitement sinking in. Our hotel room was a spacious one with the most amazing garden overlooking the aquamarine waters of the Indian ocean- what more could we ask for? 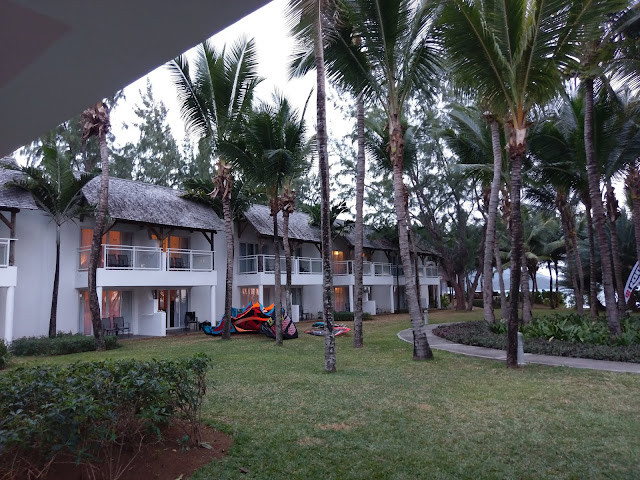 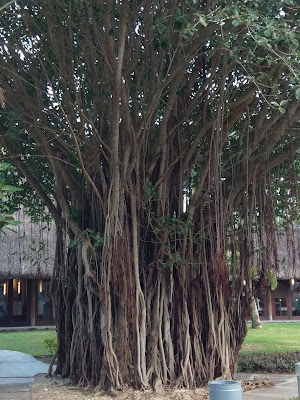 After the pre-dinner drinks by the bar, we went for supper and voila what a spread! We decided to go for a stroll on the beachfront. The air had a slight chill, after all it was the Mauritian winter (Mauritius is located in Southern hemisphere) which reminded me of the lovely British summers. The days to come saw a few rain showers, but that did not dampen our spirits at all. 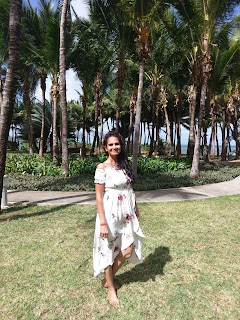 Mauritius is a gorgeous island country that sits close to the south –east off African mainland. Divided into four districts- east, west, north and south, the entire country can be covered in a matter of just 2 hours! The country thrives on its sugarcane crop and of course, tourism. Roads here are lined by sugarcane fields just the way date palm trees are in UAE. One thing that I was in awe of was the traffic discipline on the Mauritian roads. The fact that the vehicles (and population) were much lesser, probably contributed to this.

Besides the welcoming locals and the stunning views, Mauritius has another unique selling point- its affinity for water sports. The waters here are key to some unique adventures like the submarine ride and undersea walk, which we gleefully tried. The submarine ride is like an aircraft completely submerged in water to a depth of 35 metres and through its glass windows we could see the beautiful coral beds and colorful tropical fish and even the debris of some ship-wrecks. Other regular water activities abound like kite-surfing, wind-surfing, yachting, jet –ski, parasailing, snorkeling and scuba diving. So, the popular belief that Mauritius is an exclusive honeymoon destination is a misnomer. There really is so much to do in Mauritius, that too for the entire family!!

The second day, our tour began with a halt at the viewpoint of Trou Aux Cerfs. This is a dormant-volcanic crater some 100m deep and 1km in circumference rimmed by a densely- wooded forest. Thereafter, we proceeded to La Vallee Des Couleurs that is famed for the naturally- coloured, twenty-three shaded earth. Not only this, the Valley is a euphoric hotspot for thrill-seekers and sporty people looking for some adrenalin rush! 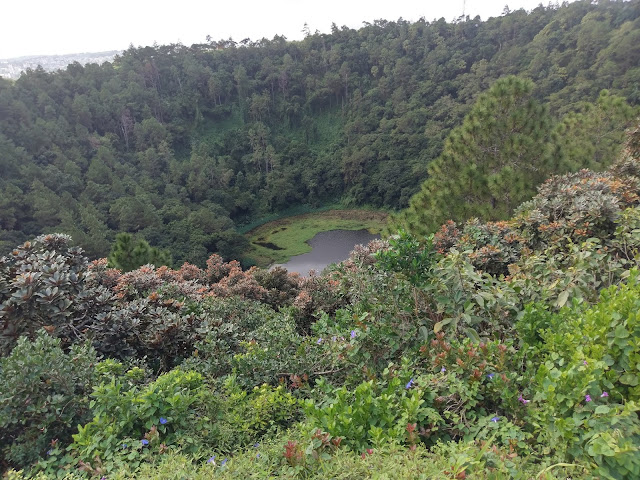 It was lunch time and we were ushered into a semi – open air restaurant. As we filled our tummies, we also gazed at the greenery-infused vistas, several zip liners whizzed past us. A rather stunning sight! We could hardly await our own chance at this amusing activity. There were plenty of other reasons for us to get hooked to this mesmerizing outdoor park. First of all, its location left me completely fascinated. It is rightly located in the midst of a vast, green meadow. 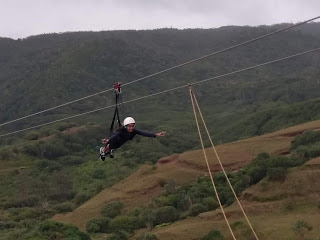 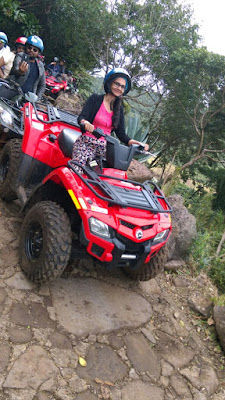 The 500- metre zipline took us over the stupendous green meadow with a kids’ playground and acres of unrivalled views. The chilled air that caressed my cheeks was a fabulous bonus. I was so thrilled to have done it that I decided to go in for the 1.5 km zip line as well, one of the longest zip lines in the world. And I am so glad that I didn’t miss it! The views from atop the zip line point were ephemeral. 360 degree views comprised of mountains and the sea shores, providing an absolutely marvelous sight.

The fun, of course didn’t stop at the zip lines! We were given quad bikes for a fun drive through the park. As part of a caravan, we quickly left to explore the park and its several view- points. This quad-biking spree took us through some bumpy, hilly paths and by-lanes of the park. The ride that lasted for nearly an hour, detoured at several sites like crystal clear waterfalls and a tortoise garden where we actually got to feed a giant tortoise. I have often heard people say that the journey is more exciting than the destination. Our quad biking spree was a perfect testament to this quote as it was a thrilling experience! But the icing on the cake was the site of the coloured earth. Yes, true to its name, the park consists of a portion that contains twenty-three colours of earth, a part of the volcanic ash whose origin supposedly dates back to millions of years. We marveled at the hue of colours, ranging from yellow, red, brown, violet, purple, green and even blue.

Content with the amazing adventures, we happily retired to our hotel and settled downin the lobby. It was evening time, the atmosphere was buzzing with activity, the in- house DJ playing nice numbers. Guests chilling out with a glass of beer, many even busy with their gadgets, whatever, the atmosphere was lively and convivial. It was like having a big in-house party. In the late evening, we were treated to a cultural show in the hotel theatre followed by disco night.

Excitedly, the next day we set out for a tour of the Île aux Cerfs. After a brief by the tour company, we set sail on a speedboat, soaking up the magical views as we glided on the baby-blue waters of the ocean. We came to a platform especially meant for the Under Sea Walk. This activity is supposedly unique to Mauritius wherein an ultra- heavy belt is tied to the waist and a glass helmet (to supply oxygen) is worn over the face to enable us to literally walk in the sea. The entire experience was mesmerizing. Seeing an entire school of colourful fish wading by our eyes made it an out of the world experience! 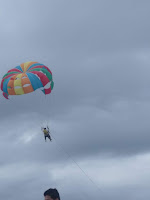 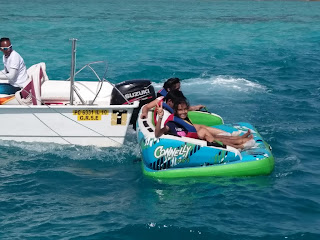 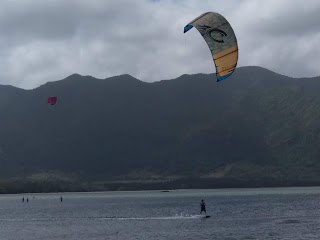 Once out of  water, a brisk tube ride whisked us through several kilometers around the ocean. What an experience- the crisp, chilly air that brushed past our faces gave a heavenly feel. Once back to our platform, we had a quick packed lunch as we set sail on our second mission, a sail upriver to the famous Grand River Waterfall. We stopped by to take shots of these majestic falls, where roaring waters crashed over the cliffs across the river and we captured these moments from the precincts of our speedboat. 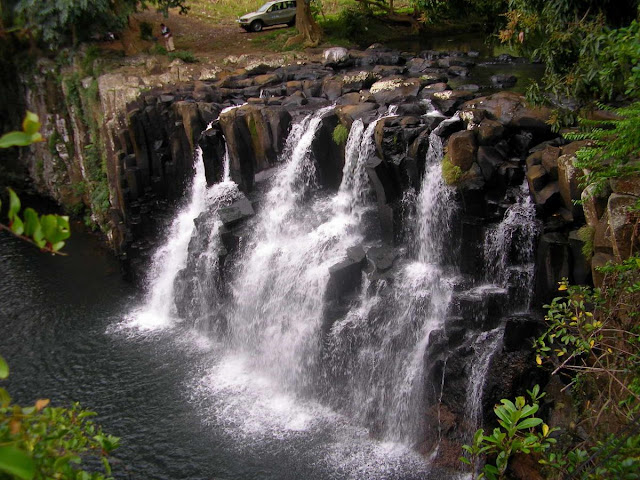 We rounded off a blissful day with free time on the gorgeous beach of Île aux Cerfs, an island jewel basking off Mauritius’ eastern shores featuring powder- white beaches. The colour of the surrounding waters left us speechless! We waded in the waters, sun-bathed for a couple of hours and tried parasailing. What a blast!! Now I understood why Ile Aux Cerfs is called the paradise island of Mauritius. And it lives up to that name, down to the last bit! This fun-filled day would be etched in our memory for years to come.

The last day of our trip, we decided to chill in our hotel. To my utter surprise, at 7 AM, scores of kite surfers were already prepping up their kites. Such enthusiasm!! By 10 AM, the sea was full of surfers, kite surfers, kayaks and stand-up paddlers- some seasoned, some novice. In either case, each one was bubbling with enthusiasm. The sky was filled with kites and we spent the entire day lazing around on the beach with some rounds of beach volley and football. Over these days, I had come to realise that the aquamarine Mauritian waters are a focal point for water sports enthusiasts across the world.

On our way back to the airport, we took a tour of Port Louis, the bustling capital of Mauritius that boasts of French colonial architecture. The city captivates with its laid-back, serene appeal. It is an eclectic mix of traditional with modern charm all in the lap of nature- mountains on one side, sea on another. Facing the harbour, Le Caudan Waterfront (something akin Dubai Marina) is another hotspot that offers upscale shopping and a range of entertainment options, including a casino. We took considerable time exploring the handcrafts market here, buying sarongs, souvenirs and watching the craftswomen merrily weaving their cane baskets.

With a heavy heart, we bid adieu to what can be happily remarked as a holiday of a lifetime. It was an ultimate relaxation kick and we returned thoroughly invigorated. We still recollect great moments of a relaxed getaway, surrounded by the picturesque, emerald waters of Indian Ocean and the swaying coconut palms.

With a treasure trove of fun-filled activities for the entire family, Mauritius’ frolic side needs to be discovered as much as its beauty. All you need is the heart to try them out! 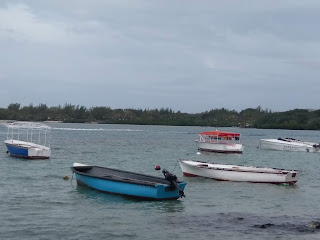 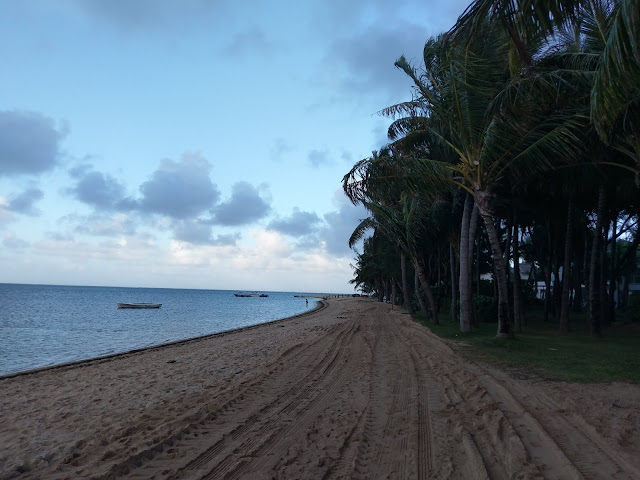 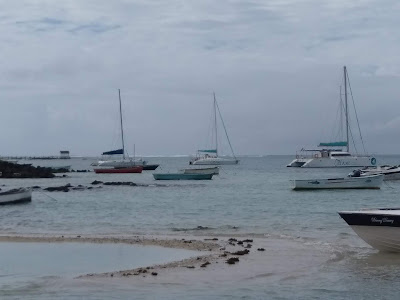 One Thought to “An aqua paradise called Mauritius”